This page about President Abraham Lincoln. 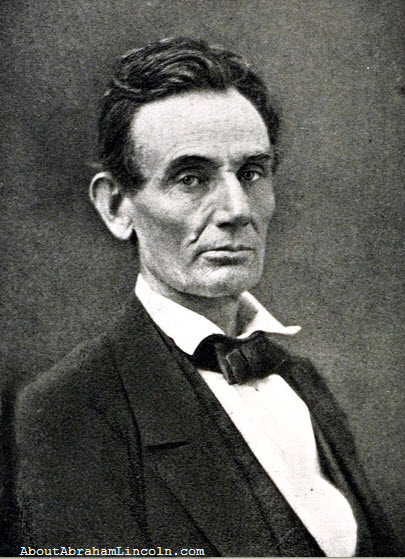 President Abraham Lincoln, sixteenth President of the United States, was born in Hardin County, Kentucky, February 12, 1809 and died April 15, 1865. He descended from Samuel Lincoln, who came from England to Massachusetts in the early history of American settlements. His father, Thomas Lincoln, married Nancy Hanks in 1806, and in 1816 removed with his family to Indiana and settled in Spencer County, not far from the Ohio River, where Abraham Lincoln grew to manhood.

In 1818 Abraham Lincoln's mother died and the following year his father married Sarah Johnson, under whose careful training his youthful character was formed in the line of prudence and industry. His early education was necessarily limited, but, being studious, he developed remarkable proficiency in the elementary branches and became a studious and scrutinizing reader. His father again emigrated in 1830, settling in Macon County, Illinois, where Lincoln, having attained the unusual stature of six feet four inches, joined with his father in clearing the fields, building his cabin, and splitting the rails for enclosing the land used for farming purposes. After clearing and fencing the farm, Abraham Lincoln engaged with a man named Denton Offutt, whom he accompanied to New Orleans on a trading voyage, and later engaged with him as a clerk in a general merchandise store at New Salem. While there, Lincoln read extensively, began the study of surveying and the principles of law, but soon after raised a company to oppose an Indian uprising, being elected captain of a company of volunteers.

The company was mustered out of service after a short time. However, Lincoln reenlisted as a private and was mustered out in 1832, returning home to make a run for the Legislature, but was defeated. He next purchased a store, giving his note for the purchase money, but was unfortunate in selecting a partner, on account of which the business venture proved a failure, and he was called upon to pay the indebtedness out of his personal earnings. Soon after leaving the store, Lincoln devoted his whole time to the study of law, was appointed deputy county surveyor, and in 1833 became postmaster of New Salem, a position he filled successfully for three years. He served in the Legislature from 1834 to 1842, declining further election.

In 1837 Abraham Lincoln formed a law partnership with John C. Stuart at Springfield, and built up a successful practice. He married Mary Todd in 1842, and in 1846 defeated Peter Cartwright, a famous Methodist preacher, for Congress, but was not a candidate for reelection. While in Congress Lincoln took an active position against the extension of slavery, favored the abolition of slavery in the District of Columbia, but, after retiring, gave little heed to politics, though still favoring the Whig party. When the Kansas-Nebraska bill was passed, in 1854, he again undertook active campaign work, and became a leading exponent of the newly formed Republican party in the State of Illinois.

In 1855 the Whig minority of the State Legislature of Illinois supported Lincoln for United States Senator, but his Democratic opponent, Lyman Trumbull, was elected. His party chose him to oppose Stephen A. Douglas for the Senate in 1858, and he immediately challenged his opponent to a joint debate. The debate that followed attracted national attention, but the Legislature chosen selected Douglas as Senator. He had been mentioned for the Vice Presidency in 1856, receiving 110 votes in the national convention, and in 1860 he was nominated for the Presidency on the third ballot in the Chicago convention over William H. Seward, who was his principal competitor. In the election that followed the Democratic party was divided and the vote in the electoral college was as follows :


Soon after the election of Lincoln to the Presidency, a secession movement began in the Southern States. This course on the part of the Southern people was occasioned largely by a widespread alarm at the aggressive antislavery policy proclaimed by many leading Republicans. At the time Lincoln was inaugurated, March 4, 1861, seven states had announced their secession and began to organize resistance to the policy of the administration. Lincoln adopted a conciliatory course, holding steadfast to the union of states and denying their right of secession claimed by the seceding states. The Confederate government was organized as early as April 4, and on April 13 the Confederates struck the first blow of the Civil War by capturing Fort Sumter. It was a period of intense excitement. The long war that ensued was the most terrible conflict that had yet been fought, the Northern States holding steadfast to the union of states, and putting forth every energy to maintain the Union.

In the history of the struggle Lincoln is identified with every important phase, giving studious attention to foreign complications, domestic politics, and military and naval movements, as well as routine domestic duties. Profiting by the partial success of the Battle of Antietam, he issued a preliminary proclamation on September 22, 1862, fixing the coming January 1 as the date of freeing the slaves in the Southern States, in the event that the seceded states would not yield, and, accordingly, the Emancipation Proclamation was issued. His famous eulogy was issued on the battlefield of Gettysburg in 1863.

The Republican national convention at Baltimore unanimously renominated Lincoln for the Presidency on June 8, 1864, and at the election that followed in November Lincoln received 212 electoral votes to 21 cast for General McClellan, the seceded states not taking part in the election. Lincoln's running mate and Vice Presdident was Andrew Johnson.

Lincoln visited Richmond after its fall, and entered upon a studious investigation of the questions relating to reconstruction. While at a theater in Washington he was shot by John Wilkes Booth on April 14, 1865, from the effects of which he died the following day. The remains were taken for burial at Oak Ridge, near Springfield, Illinois, amid the most profound sorrow of the public. The unexpected death of President Lincoln is rightfully regarded the saddest event of American history. Many of his sayings have become proverbial. His sincere devotion to country and his uprightness in every act have rarely been equaled.